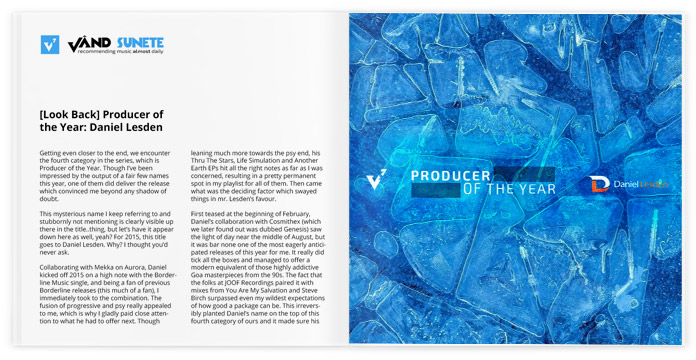 Getting even closer to the end, we encounter the fourth category in the series, which is Producer of the Year. Though I’ve been impressed by the output of a fair few names this year, one of them did deliver the release which convinced me beyond any shadow of a doubt.

This mysterious name I keep referring to and stubbornly not mentioning is clearly visible up there in the title..thing, but let’s have it appear down here as well, yeah? For 2015, this title goes to Daniel Lesden. Why? I thought you’d never ask.

Collaborating with Mekka on Aurora, Daniel kicked off 2015 on a high note with the Borderline Music single, and being a fan of previous Borderline releases, I immediately took to the combination. The fusion of progressive and psy really appealed to me, which is why I gladly paid close attention to what he had to offer next. Though leaning much more towards the psy end, his Thru The Stars, Life Simulation and Another Earth EPs hit all the right notes as far as I was concerned, resulting in a pretty permanent spot in my playlist for all of them. Then came what was the deciding factor which swayed things in Mr. Lesden’s favour.

His releases hit all the right notes, resulting in a pretty permanent spot in my playlist for all of them.

First teased at the beginning of February, Daniel’s collaboration with Cosmithex (which we later found out was dubbed Genesis) saw the light of day near the middle of August, but it was bar none one of the most eagerly anticipated releases of this year for me. It really did tick all the boxes and managed to offer a modern equivalent of those highly addictive Goa masterpieces from the 90s. The fact that the folks at JOOF Recordings paired it with mixes from You Are My Salvation and Steve Birch surpassed even my wildest expectations of how good a package can be. This irreversibly planted Daniel’s name on the top of this fourth category of ours and it made sure his name stayed there.

Just to be sure I got the message as clear as I could’ve, he traded places with You Are My Salvation later in the year, remixing the Swede’s Research & Development release, As The Horizon Comes Closer. After that, he ended on the uniquely titled Enuma Elish (which is the name of the Babylonian creation myth, for those not familiar) making yet another appearance on the JOOF family of the labels.

If the releases still haven’t convinced you, he’s also doing a weekly knowledge exchange on his site, covering a variety of interesting topics for you aspiring musicians out there, or for those like me who just enjoy reading things regardless of the subject.